You will receive one Smoky Quartz Orb, measuring approximately 25 - 30mm. These specimens are deeper in coloration, and offer less clarity.

Specimens are made of natural materials and stones may feature natural internal fractures, tiny dips, or inclusions consistent with the growth pattern of the stone. Clarity level varies from orb to orb.

Smoky Quartz was known to the Druids as a "Stone of Power". It was integral in ceremonies and rites of magick as the stone was known to be a guide for souls to the afterlife. Throughout history, Smoky Quartz has reigned as a respected and honored stone in magick and is often referred to as a "Shaman Stone" because of its use in scrying, divination, rituals, and ceremonies of spiritual contact. Smoky Quartz is a natural protective force in the spirit world, barring evil entities from entry into this world and keeping malicious energy out of the home. It guards against psychic attacks, stress, negative energy, and plaguing forces. In ancient times Smoky Quartz was believed to hold the smoke of Dragon's fire which was believed to be a cure-all for supernatural ailments.

Smoky Quartz ranges from a pale grey to a deep and full-bodied brown-black. It is also known as Irradiated Quartz or Smokey Quartz. Since Smoky Quartz typically grows from and amid clear quartz, it will often have a white or clear base. It may also show a slightly yellow coloration due to natural Citrine growth.

Exactly what I ordered

Very low quality smoky quartz and not advertised as such. 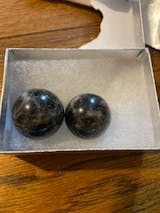 thank you so much i love it!

I am always happy when I receive my order. The spheres are my favorite and will continue to add to my collection!