Stone that Stimulates Your Third Eye

Honey calcite is a versatile and energetic gemstone that stimulates your Third Eye & Crown Chakras for a symbiotic balance that brings out the best in your life. It instills confidence and provides an enduring energy and motivational focus that helps you to sail through difficult times in your life. The stone guides you to embrace your divine and ethereal power and become "one" with Universal forces. Honey calcite opens your mind and encourages sexual expression and freedom.

You will receive one tumbled gemstone, approximately 0.9"-1.1" in length.

Free Gemstones with Purchase - Limit 1 Per Order Level - Details Inside

PLEASE DO NOT ATTEMPT TO ORDER A FREE GIFT AS THE ONLY ITEM ON YOUR ORDER.  SUCH ORDERS DO NOT QUALIFY, AND WILL BE CANCELLED...

Metaphysical Properties of Rose Quartz Rose Quartz is the gemstone that resonates the most with love; in all its forms. When you work with rose...

On the bright side,I did get the two gemstones without any dark spots,as I requested, but although the stones are attractive, only one of them has a mostly clear honey looking appearance( with less of the white (milky) appearance than the second stone which is mostly milky in appearance! They do not match the mostly clear picture that I saw on the site! I still like them, anyhow! I have attached two pictures of both stones, side by side, from both sides of the stones( one is the reverse side)! 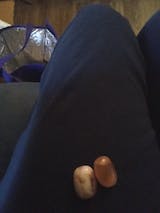 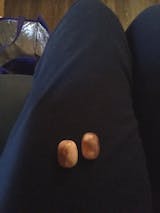 A
Anne Gaal
Love this little jewel! It's at the top end of the...

Love this little jewel! It's at the top end of the description in terms of length at 1.1'. And the color is exactly what I expected based on the photo. I'm a repeat customer and continue to be very pleased with this seller. Thank you!

B
Betsy
Love the colors in this stone - gorgeous!

Love the colors in this stone - gorgeous!