You will receive one tumbled stone measuring approximately 0.5" - 1" long.

These stones are natural Garnet, with many natural interal fractures, as shown in photo.

Stone of Many Gifts

Garnet is a stone that is multi-faceted in its powers. It resonates with your life essence while providing a natural field of protection against the malicious, supernatural forces of the world. For those who have supernatural abilities, garnet acts like a natural stimulation and will bring all gifts to the surface. This gemstone can help you to manifest many things, including your natural talents and gifts, your wishes & dreams, and what you need most for success in life. The more you work with garnet the more you find how intently it aids you in the realization and utilization of your paranormal gifts.

Garnet is known for its internal fractures and facets, which show beautifully when the stone is held to strong light sources. Garnet can form in many different colors, such as orange (hessonite or spessartite garnet) or green (grossular garnet), but it is most known for being a range of pinks, reds, and deep burgundies.

Where do I begin!? This piece is so gorgeous. So intense. So vivid and so deep and rich with beauty. I love it so much! It's hard to just stop at buying one! The size, feel and polish is just perfect!

The stones are beautiful. As always, our order was processed and delivered rapidly. I wish all vendors were as prompt as the Crystal Gemstone Shop.

garnet has been my favorite gemstone forever, but i never had a tumbled version of it. the deep maroon color is so pretty and the piece i receive is bigger than i expected, so it was exciting to unbox! 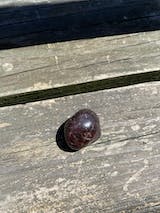 Love my new pieces!! Can't wait to start working with them