Turquoise has been hailed through history as a stone of great power. It has been worn and adored by kings, warriors, shamans and medicine workers for its intense metaphysical properties. It was highly coveted as a stone of protection; providing a supernatural shield of protective power to anyone who wore it. For this reason warriors were known to mount the stone in their weapons and wear amulets carved from turquoise around their neck. Egyptians, Tribal Americans, Chinese, Incans, Persians, Aztec and many other ancient civilizations respected turquoise for its simultaneous bond between the celestial & terrestial Realms. The name "turquoise" comes from the French word pierre turquoise which means "Turkish stone". for centuries turquoise was a hot commodity in the Turkish markets as its popularity grew throughout Europe, the Middle East, Asia and Africa. Turquoise has been used in magick rites of spellcasting and conjurations, through Shamanic means of connection to the dead as turquoise was often buried with the recently deceased, and in usage with personal spiritual paths and grounding. It is a gemstone that brings success, power, motivation, confidence, and prosperity to anyone who wears it or works with it.

You will receive one stone glass bottle, 1.75" in height, filled with approximately 11 grams of gemstone chips.

This a really nice bottle of chips, the color is great and the chips are a nice size! 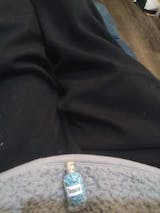 E
Eccentric Bruen
thank you so very much!!

thank you so very much!!

Beautiful little jar! Just as described. Even got a huge gift! Will absolutely buy from this shop again!!!! 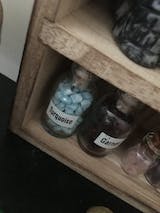 Love the turquoise I got from here

j
jgoerler1
Turquoise is my birthstone so it only seemed fitting to...

Turquoise is my birthstone so it only seemed fitting to include this in my new collection!