You will receive one faceted Garnet in the approximate size range you have chosen.

These are made of natural Garnet and may exhibit the internal fractures that Garnet is known for as part of its growth pattern. They may also have small inclusions of matrix.

Garnet is a stone that is multi-faceted in its powers. It resonates with your life essence while providing a natural field of protection against the malicious, supernatural forces of the world. For those who have supernatural abilities, Garnet acts like a natural stimulation and will bring all gifts to the surface. This gemstone can help you to manifest many things, including your natural talents and gifts, your wishes & dreams, and what you need most for success in life. The more you work with Garnet the more you find how intently it aids you in the realization and utilization of your paranormal gifts.

Garnet is known for its internal fractures and facets, which show beautifully when the stone is held to strong light sources. Garnet can form in many different colors, such as orange (Hessonite or Spessartite Garnet) or green (Grossular Garnet), but it is most known for being a range of pinks, reds, and deep burgundies.

Very high quality! Gem came in the middle of the described weight range

One of the best garnets I've seen. I ordered a large size and was very pleased. 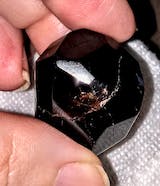 J
Jesi P.
One For Me, One For My Fiancee

and they are beautiful! They had been carefully packed and the customer service is top notch! Thank you all for choosing some great stones/crystals for me. Will be purchasing more :)