Specimens are made of natural materials and may feature internal fractures, dips, inclusions, or small druzy pockets inherent to the growth patterns of the stone.

Due to the nature of Moss Agate, specimens may feature more green or more clear/white. Coloration varies from stone to stone.

Moss Agate has been known throughout history as a healing stone, a druid’s stone, and a stone to strengthen warriors. Moss Agate has also been tied to ancient texts that describe it as attracting wealth and prosperity. It is a multi-talented stone, encouraging inventive and creative thinking, emotional growth and balance, and a greater awareness of opportunities. Moss Agate is a stone that attunes us to the rhythms of the world around us, helping us to stay grounded and avoid letting negative emotions sway our decision making. It assists in building a leadership mindset of steady and resourceful thought, encouraging us to triumph in every area of our lives!

Moss Agate is most associated with cloudy shades of green floating within clear or semi-clear Chalcedony, but it can also be found with touches of other colors (reddish-brown, brown-black, yellow-brown) depending on its source location. Green Coloration in Moss Agate is due to inclusions of Chlorite or Hornblende, whereas darker coloration or Dendrites suggest the presence of iron oxides. When the clear portions of Moss Agate are a more solid white, it is commonly referred to as Tree Agate instead. Moss Agate is also called Ocean Grass Agate, particularly when there are only thin tendrils of green floating in the clear portions of the stone.

Nice size and very smooth. The colors are very nice with deep green to green blue, possibly with a touch of quartz on one side. Crystal Gemstone Shop never disappoints! 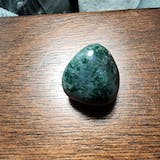 Moss agate is such a beautiful stone. Moss agate and tree agate are among my favorite stones because of how earthy they are. They not only look gorgeously earthy but the feeling you get from them are as such as well. The richness of the deep greens are just so captivating in this stone.

D
Dahnya Lemke
it really looks so majestic, almost like a...

it really looks so majestic, almost like a dark sky too with stars or clouds