Cinnabarite (also known as Cinnabar) is a powerful stone for unearthing the divine powers within you.  If you wish to reach higher levels of enlightenment, working with Cinnabar can give you the motivation and push you need to advance to a master's level.  This gemstone promotes personal power and achievement, driving you to excel in any avenue.  Cinnabar is a natural magnet for prosperity and wealth, and can attract good fortune in many ways, from windfalls to new opportunities.  Cinnabarite is the stone for those who are seeking a fresh start, a new beginning, or a shift toward living their most authentic life. It is a stone that functions as a bridge between the Root and Sacral Chakras, promoting a feeling of security when making important and life-altering decisions.

I wasn't sure quite what to expect with this Cinnabrite, but I did experience that "shift" in consciousness in a lovely, easy way. I'm loving this stone!

wow i have never heard of cinnabarite until i saw this stone on the site, but it’s quickly become my new favorite! i’m obsessed with the piece i received, so many pink dots that are so cute! love this stone so much 😍 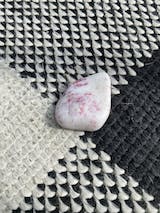 I just love the colors of this stone